The Importance of Jason Day 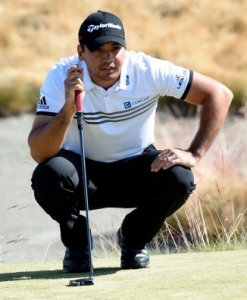 Jason Day is doing something no golfer has ever done in the history of the sport, and no, it’s not breaking world records (though he has been doing that a LOT, lately.) What he is doing is so profound, I believe he is going to start a trend and bring spirituality, personal development, enlightenment, and a shortcut to excellence to an entirely new group of people who might otherwise never discover these. What he is doing is also confounding every golf announcer and golf fan around the world. 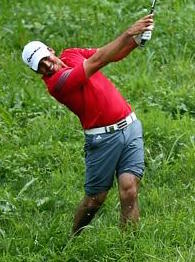 The world got a glimpse of Jason Day’s amazing quadriceps when he crossed a creek to hit out of the rough last year.

Most people don’t understand what Jason Day is doing when he closes his eyes and takes a deep breath before each shot, other than what the announcers explain: He is  visualizing his next shot. No one seems to have noticed yet that he’s also using an “anchoring technique” – a performance technique that many motivational speakers have been using for years. In spite of countless setbacks and health issues, Jason has been achieving stellar results this season, so he just might become the poster child for the importance of meditation and creative visualization.

I don’t want to minimize the hard work Jason Day has been putting into his game. Today’s golfers need to be powerful athletes (check out Day’s quadriceps!), they need to be strategists, and they also need to be able to focus, the most important factor in golf.

Occasionally, an extremely talented player will dominate the game of golf, but it’s nothing like how Michael Jordan dominated basketball. It’s not JUST a physical game; if it were, we’d see a few players winning 10 tournaments every season. Plus, we must factor in the fact that golfers are working on a living, breathing golf course, not a standard basketball court or tennis court. If you tee off at 9AM, you’ll be playing a completely different course than the player who tees off at 12PM. The sun is shining, the grass is growing, and moisture is evaporating – all factors that can affect how the balls roll.

I love golf because it requires incredible focus, talent, AND physical skill to succeed. Jason Day is the first player to openly use creative visualization – on the course – in front of everyone – to see the shot he wants to hit, and then execute it perfectly. Because of this, I think he is the most courageous golfer in the PGA today. And, I’m pretty sure we will start to see more players – professionals and amateurs alike – starting to emulate his pre-shot routine, particularly because of the results he is achieving. I’m delighted about this because I also noticed that as Tiger Woods game suffered and he began to throw or drop his clubs after a shot, so did players everywhere – even on tour! It’s disgusting behavior. And, I’m so glad the Jason Day may start a new, more positive trend in the game. 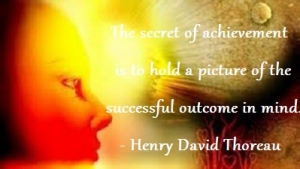 Creative Visualization is nothing new, but Jason Day is bringing it to a new arena – GOLF!

Here’s the kicker: ANYONE in ANY BUSINESS can do this and achieve greater results and unprecedented success. If you want to know where you’re going to be five, 10, or 20 years from now, you must first visualize yourself already being there. When I started writing, I saw myself at a book signing. A few short years later, there I was – at a Barnes & Noble – signing my books. When I saw myself as a filmmaker, just one year later, I was introducing the stars of my film at an amazing movie premiere. We MUST visualize where we want to be as the first step to getting there.

As for the anchoring technique, watch Jason Day as he closes his eyes and visualizes his shots. He is pressing his right thumb against his left wrist, just inside his glove. He does this as he visualizes his shot. Same way, every time. It’s like creating muscle memory. Speakers may have a similar gesture to help remember their lines. They press one hand against the other as they study their presentations. Later, on stage, a simple press will help the mind to remember what they wanted to say.

These techniques are incredibly important. I believe that Jason Day is single handedly going to revolutionize the game of golf. I will even go so far as to predict that a year from now, we’ll be seeing several players closing their eyes and visualizing as part of their pre-shot routine … ESPECIALLY if Jason Day keeps winning as he has this season.