Building Relationships Can Help You Achieve Your Dreams

As a Business Relationship Expert, I have been able to accomplish so much more than I ever dreamed possible. As I move toward the December 8th premiere of “The Keeper of the Keys” – a personal development movie I’m producing – I am amazed at the important role that my business relationships have played in the success and execution of this production.

I put myself in a position to help others. Once you are able to build a reputation for being a “go-to” person, your friends and colleagues will come to you for everything. You will end up getting connected with extremely important people. Keep in mind, however, that your intentions must be pure! The benefit of building great relationships by helping others should never be about ultimately helping yourself … but that IS what is going to happen.

If you aren’t where you want to be, or where you THOUGHT you might be by now, ask yourself: “What can I do for others? How can I help THEM to achieve THEIR goals?” I assure you, it won’t be long before people want to help you in return. Reciprocity makes the world go ’round.

My goal for this movie was to help as many people as possible by showing them how to accept greater responsibility for their lives so they could stop feeling victimized by society, the economy, or even the government. To keep them engaged long enough to enjoy this personal development film, I had to find a way to “take the ‘hell’ out of self-help”! 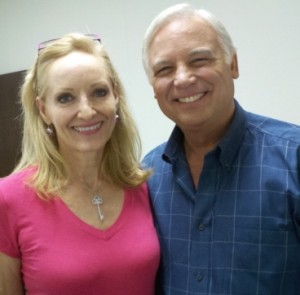 Robin Jay with Jack Canfield on the set of her movie, "The Keeper of the Keys"

From the very first moment when I CONCEIVED the idea to produce a personal development movie, I wanted Jack Canfield as the STAR. Because I have worked with him before, included him in my anthology series, “The Power of the Platform”, and have worked hard to get him speaking engagements, he said he would love to be featured in my movie! He knows the caliber of work I produce and knows that I will feature him in a great light. As for Jack’s opinion when I told him that my movie is going to raise the bar on the entire self-help genre by being the first FUNNY, REAL-LIFE movie, he said, “Sounds like fun!” What a gracious man. I adore Jack. It’s true: the bigger they are, the kinder they are. Everyone who knows Jack loves him. 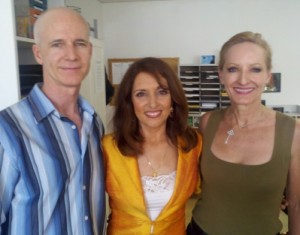 Director Scott Cervine, Marci Shimoff, & Robin Jay in the studio to film Marci's segment in "The Keeper of the Keys"

And, speaking of LOVE, my second choice for a star in the movie was Marci Shimoff, whose book “Love for No Reason” made it to the top of many best-seller lists earlier this year. Marci had contributed a chapter to my anthology series and helped me out. I wanted to help her by putting her in what I knew would be an amazing movie. She agreed.

Guess what Marci did for me then? She asked me if I would like her to invite her friend, John Gray, to be in the movie, too! John Gray – who has sold more than 50 Million copies of “Men are from Mars, Women are from Venus” – is now in my movie. Friends like to help friends. And, I am thrilled to share that he HIT IT OUTTA THE PARK! His explanation of why men and women have trouble understanding each other is pure gold! And now, he shares this wisdom in MY MOVIE! Think I’m excited about THAT?! You betcha! Thanks, Marci!

Think about all the dreams you have … and every lofty goal you’d like to accomplish in this lifetime. I can assure you that doing all you can to help others will come back to you WITH INTEREST. Jack Canfield says we should all learn the 3-letter word that can move mountains: “ASK”! I learned to ask, and I agree with Jack that asking can deliver tremendous results. But, when you remember to ask what YOU can do for OTHERS, that is when you’ll really see your business increase and your life will become more fulfilling than you ever imagined.