An Idea Takes Hold: The Keeper of the Keys movie is Born

If you’ve been following my blog posts on the Las Vegas Convention Speakers Bureau site, then you will know why I’ve been neglectful of my RobinJay.com blog … I’ve been busy producing a personal development movie this year- “The Keeper of the Keys” – starring Jack Canfield, Dr. John Gray, PhD, and Marci Shimoff. These experts are leaders in the field of personal development and it has been thrilling to get to work with them on the movie set. Production finally wrapped last week, and now it’s up to my Director/Editor, Scott Cervine, to work his movie magic.

“PAPER Books are SO ‘Yesterday’… Media is DIGITAL Now!

So – what’s up with the movie? No offense to great authors everywhere, but books are “so yesterday!” Okay, I’m just being flip … let me revise that: “PAPER books are So Yesterday!” Digital readers have taken over the world; iPads, Kindles, Nooks, and various tablets are the RAGE today! And this trend is only going to get bigger. And, today, you can watch a MOVIE on your smart phone (or most of the above tablets.)

I Wanted to EMPOWER More People by Producing an Engaging, Funny Movie That Would Really Help Them to Understand the Universal Laws … or Keys

I became a non-fiction writer because I wanted to help people. It’s easy to see that I will be able to help even MORE people with an engaging, digital format – a MOVIE! Imagine – in just 70 – 75 minutes, you can reach an entire ROOM FULL OF PEOPLE – with a message of empowerment, wrapped up in a package that is entertaining, compelling, and even funny! That is EXACTLY what I am doing this year. 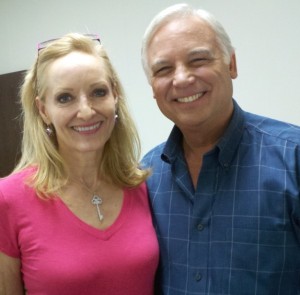 Producer Robin Jay with Jack Canfield, Star of "The Keeper of the Keys"

I had the idea to do this when I saw a friend’s movie. I said, “I would LOVE to make a movie, too!” And he said “You could…!” And then he told me how he did it. But, as with everything I do, I wanted to take the project to an even higher level. I asked two of my most popular coauthors, Jack Canfield & Marci Shimoff, if they would agree to appear in it. They said they would. Victory!

Then, I recruited about a dozen other experts from around the world who are amazing, though their names are not as well known as Jack’s or Marci’s. Then, right before filming her segment, Marci asked if we’d like to have John Gray in the movie. OF COURSE we would! And so far, everything has worked out beautifully!

Surround Yourself with the Best of the Best 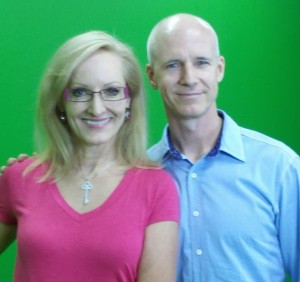 I believed I could produce a movie … and I was even fairly certain I could appear in the movie. (After all, speaking to groups of 500 people takes a certain degree of show biz savoir-faire! :)) BUT, I was wise enough to know I needed to hire a director. I invited Scott Cervine, whose production company is Movies From the Heart, to direct. He has produced some truly outstanding personal development movies. Scott brought in an incredible crew, including cinematographer David A. Fisher. Now, with filming wrapped, Scott is busy editing the movie.

I am currently focused on putting together a smashing, over-the-top VIP RED CARPET PREMIERE, on December 8th, at the Brenden Theatres at the Palms Resort in Las Vegas, Nevada.

This premiere is going to be the most incredible event of the year. After all, have you been having enough FUN this year? Seating is limited. A portion of the proceeds will be going to Volunteers in Medicine, Southern Nevada. More details to come soon.

For information or to reserve your seats for the premiere, email me at Robin@RobinJay.com. I look forward to sharing with you the most engaging personal development movie EVER!