It’s Hard to Stump ‘The Queen of the Business Lunch’!

I got to speak to an outstanding group of professionals this week – printer resellers and distributors for HP. Since the program was for several hours and included lunch, I conceived an exercise to keep everyone engaged during the actual meal.

I passed out forms asking what was the WORST thing that had ever happened to them during a business lunch, how they might have been able to handle the situation better, and to add any other challenges they may have at networking or business events.

Since I’ve been speaking on “The Art of the Business Lunch” and building relationships for nearly 10 years now, and have YET to be stumped, I thought this would really be fun. The afternoon flew by, however, and I did not have the opportunity to go over the comments I received. Hence, I wanted to share the responses here … in a blog or two.

Never Draw Attention to Something Bad!

One of my favorite stories came from a rep walked into a restaurant with a client. About 15 minutes later, he pointed out a distracting couple that was making out at their table. Turned out to be his client’s husband and his mistress. When asked what he might have done differently, his only comment was that he should have asked this lady out after her divorce. Apparently, she’d “cleaned her husband’s clock” in the divorce. She got such a grand settlement, she quit her job and hasn’t worked since. I GUESS you could call that a happy ending?!

Another executive actually left his wallet at home. As for handling the situation better? He said he should have rescheduled his meeting for another day. I think that would have been a terrific solution – IF he wasn’t able to borrow $100 from a friend or swing by his house before lunch. BTW, I told him a story from my book about a sales rep who consistently “left his wallet at home” as a means of getting his clients to pick up the check. The buyers, who talk amongst each other, got wise and never fell for this again. 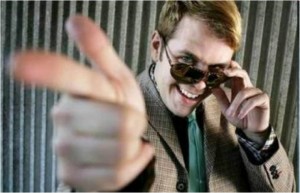 One of the professionals said he had a hard time acting interested in other peoples’ stories while at networking events. We’ve ALL been stuck in boring conversations and being prepared for casual conversation can certainly help us to steer a conversation in another direction. That being said, sometimes it is just best to excuse yourself. I’ve recommended to MANY people that they just say, “It’s been great seeing you here, but I need to work the room and mingle. Have a great evening.” Then, walk away and don’t look back!

I will share more stories in my next blog. In the meantime, let me assure you that walking into a room full of strangers is a stressful situation for MOST of us! Being prepared for casual conversation – by reading industry magazines and Web sites, being up to date on current events and pop culture, and knowing a little about a lot – will always help. Like a good scout, BE PREPARED! Asking questions of others – from “What did you do this past weekend?” to “Where is your favorite place to go on vacation?” can break the ice faster and more easily than you could ever imagine.

One final tip for this post: If you know your client likes to drink or eat something you don’t – from alcohol to coffee to raw oysters to dessert – bring a coworker with you. Usually, people just don’t want to indulge ALONE. As long as they have at least ONE “partner in crime,” your business lunch should flow incredibly smoothly.

Thanks again to all the attendees at the HP luncheon in Orange County. Your comments and input should keep me busy for quite a while! Thank you for taking the time to answer “Stump the Speaker; Shock the Speaker”!