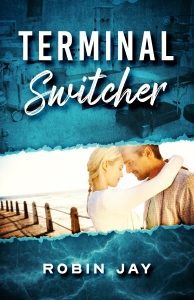 Award-winning author and filmmaker Robin Jay has announced that she has completed her first novel. After several years in Personal Development, Robin delighted in sharing this compelling narrative story. This is my passion! she says. I’ve wanted to write a novel for years. I’m thrilled to have finally taken the time to create this amazing and complex story. It’s got an underlying moral dilemma that will have readers wondering if they could do what Sunny is asked to do.

Terminal Switcher follows Sunny Monroe, from her storybook childhood to her nursing career and her marriage to handsome Air Force pilot John Sullivan. When John is sent on a dangerous mission to Afghanistan, Sunny’s world changes forever.

Rohan, a mysterious Indian doctor. He’s passionate about saving lives, but at what cost?  While on a soul-searching retreat to eastern India, Rohan learned a secret, spiritual method for switching Life Force Energy between two people. Upon his return to the United States, he began to recruit an elite assortment of specialized colleagues to help him carry out his unique, if someone questionable mission.

He approaches Sunny to join his team. Her sense of compassion and the fact that she deals with life and death on a daily basis has Rohan believing she’d be the perfect agent. Will she agree to work with Rohan and switch Life Force Energy between those who want to live … and those who are hell bent on dying? Or will the responsibility and moral dilemma be too much for her?

In 2003, Robin resigned from a career in Advertising to purse her love of writing. Her first book, The Art of the Business Lunch, Building Relationships Between 12 and 2 (Career Press), earned her the title of The Queen of the Business Lunch. The book is currently in 12 languages. As a professional speaker, Robin loves sharing stories and how-to information from her years on the front line of advertising sales in Las Vegas, Nevada.

In 2011, Robin wrote and produced The Keeper of the Keys, the first fun self-help movie. The hybrid combines messages from top thought leaders like Jack Canfield, John Gray, and Marci Shimoff, along with a cast of experts from the US and the UK. The movie won Best Independent Film at the Las Vegas International Film Festival along with several other awards. She has written and produced two other Key Movies. These are The Secrets of the Keys and Becoming the Keys.

Terminal Switcher is Robin’s first novel. She laughs as she explains, I got a little side-tracked by the self-help industry! It was always my intention to write fiction. I love a great story and I know that ‘Terminal Switcher’ is going to resonate with Women’s Fiction readers. It’s got everything, from wonderful love stories to life-and-death drama. As a speaker, being able to tell a compelling story is paramount. I now feel I’ve achieved this on paper. I am excited to share it with the Women’s Fiction market.