“The Secret” Meets “Harry Potter” in My New Film 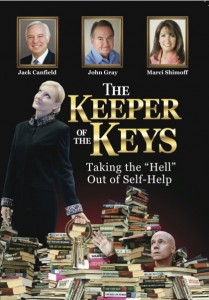 "The Keeper of the Keys" - Now Available on DVD, Shipping Worldwide

The one question I hear from people who are blown away by my new movie, The Keeper of the Keys, is “Where did the idea for this come from?” As a fan of personal development and self-improvement, I have tried (yes, TRIED) to watch all of the self-help movies that are currently available. About 20 minutes into each movie, I realize I just can’t watch anymore. They are boring; the endless stream of talking heads and trite sound bites quickly become tedious.

I thought, “WHY? Why can’t SOMEONE produce a movie that will help and empower viewers, yet will be so much fun and entertaining that even people who are NOT fans of personal development will be so engrossed watching the movie that they will learn something even if they weren’t trying to?!”

I decided I would produce such a movie. But, I’d never made a movie before. Still, my DESIRE to elevate an entire genre was powerful and I knew I would find a way. Channeling this passion is how I wrote The Art of the Business Lunch, sold it, and saw it published in 12 languages. This is how I published three anthologies, The Power of the Platform, and this is how I have accomplished every significant goal in my life. By connecting with our PASSION, we are able to move mountains.

One of the most important lessons I’ve learned over the past few years had been the importance of working with a mentor … but that is a blog (or 10) unto itself! In this case, I went to the top of the mountain, and asked producer/director Stephen Simon to help me. He was amazing. He said this movie would have to CRITICALLY  different if I was going to achieve my goal. It was Stephen who recommended that I make it funny – and I didn’t even have to think about it. I LOVED the idea!

The Keeper of the Keys was born. But, how could I make the movie funny without taking anything away from the experts? The answer was to have a dream sequence – like something out of A Christmas Carol – that would be the ticket. The idea for this came to me as I was emailing Stephen one day. Yes, it literally came to me. When the Universe wants you to accomplish your goals, it sends a lot of help along the way!

Then, I hired director Scott Cervine. He specialized in directing spiritual films and he also acts. I wanted him to play the main character in my movie. “Michael Walden” represents everyone who feels victimized by their circumstances. His transformation is deep, moving, and hilarious. He is resistant to all things and even argues with the experts to the delight of the viewers.

Next, I needed some star power. In the field of Self Improvement, that could only mean Jack Canfield. And, I love Marci Shimoff – who had contributed to my anthology series, so I invited her to be a part of this movie, too. Marci asked us if we’d like her friend John Gray on board, as well. We jumped at the chance to have John in the movie. The fact that I own the Las Vegas Convention Speakers Bureau and had built relationships with these stars made it easier for me to invite them to be in my movie. They were excited about the prospect. They had each appeared in The Secret, and were hoping that this movie might prove to be as successful.

Armed and ready to go, I recruited 15 top experts – a diverse group of authors and speakers from around the world. 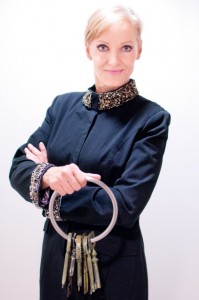 Yours Truly in Costume as "Elizabeth" - the Mysterious Spiritual Guide

I wanted the movie to be mysterious and magical, and Scott, as director and editor, was able to incorporate outstanding special effects. He found the ideal location for the dream sequence in the Parisian Palace in Las Vegas. It offered set after set and lent so much to the feel and power of the movie. The experts appear in frames and come to life as Michael, led by a mysterious spiritual guide, “Elizabeth” (played by yours truly), approach them. Not since Harry Potter has a movie been this mysterious, this magical, or this much fun. The experts share deeply personal stories – nothing anyone has ever heard before – and the stories have a tremendous impact on Michael. His enlightenment is inevitable.The movie has been compared to The Secret for its expertise and likened to Harry Potter for its special effects, though nobody flies around an arena and the transformations are internal – no one is turned into an animal! But, the fun and the moving stories are all there.

DVDs are now available for shipping worldwide. This movie will change your life. It has already been called the new GOLD STANDARD of the genre. The Keeper of the Keys has been licensed to be the April release for Spiritual Cinema Circle and should arrive in members’ mailboxes this week. Members are in more than 65 countries around the world. If you’re not a member of SCC, you can buy the DVD at the official website – click here. Sign up to become an affiliate and earn a % of all sales that come from visitors you send to the site.

I hope you will bring this DVD home and enjoy it with your family. The experts are brilliant, the story is engaging, and the special effects make it as much fun as you’ve ever had at the movies. And you will be moved. I made this movie for you – I know you will enjoy it.