“The Keeper of the Keys” Now Available Worldwide – Stream or Download

Watch “The Keeper of the Keys” Anywhere, Anytime

“The Keeper of the Keys,” the first FUNNY self-help film that promises to “Take the ‘Hell’ Out of Self-help” is now available INSTANTLY for streaming or download from the family of Key Movie sites, including this one (since I wrote & produced & costarred in the film!), the Las Vegas Convention Speakers Bureau site (www.LVCSB.com), and www.TheKeeperoftheKeys.com (currently being updated to www.TheKeyMovies.com.) This is great news for fans of self-help from around the world! The film stars Jack Canfield, John Gray, and Marci Shimoff, who each appeared in “The Secret”, along with other outstanding experts from around the world.

Now, you can watch “The Keeper of the Keys” – the first FUNNY self-help film instantly, wherever you are!

Everyone everywhere can now enjoy watching the antics of character Michael Walden as he tries to figure out what went wrong. He finds himself on a personal quest for emotional and personal growth. The story of “The Keeper of the Keys” is unlike anything you’ve ever seen. Michael Walden, played by the film’s director Scott Cervine, has become a victim of his circumstances … or so he believes! He has lost his job, his home is now in foreclosure, and he’s become SO negative that even his fiancee has broken off their engagement. Things are going from BAD to WORSE! If you have your computer or tablet/iPad handy, you can now enjoy this empowering, funny film instantly! 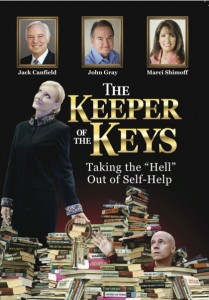 The Keeper of the Keys is Now Available Worldwide; Visit www.TheKeyMovies.com or www.LVCSB.com to download it directly from these sites.

Watch “The Keeper of the Keys” Now!

Streaming or download, “The Keeper of the Keys” has found its way to you. It’s never been easier to see this remarkable, award-winning film. DVDs are still available through Amazon.com or the movie website (www.TheKeyMovies.com) but now you can enjoy this immediately! You will laugh, you will be moved, and you will get to share all the wonderful stories that make up “The Keeper of the Keys.” Don’t wait another day to enjoy this masterpiece.