Robin Jay: How Filmmaking Made Me a More Compelling Keynote Speaker

To Keynote Speaker Robin Jay, “This Film Would Get You Hired at ANY COMPANY, ANYWHERE in the World!”

That is what industrialist Carol Scott from South Africa said the first time she saw the film I had conceived, written, raised funding for, costarred in, recruited or cast the experts for, and produced – all in just a year’s time. I love being a keynote speaker, writing, sharing my secrets for sales success, building relationships, and being creative. This film project was a wonderful way to implement everything I know and create a wonderful, entertaining, engaging, and empowering film that moves audiences. It is a tremendous success, too, having won several awards from Best Independent Film to Best Documentary. You can view the trailer or download “The Keeper of the Keys” – starring Jack Canfield, John Gray, and Marci Shimoff by clicking here.

From Keynote Speaker to Writer/Producer: A Journey in Leadership

I’ve been an author and motivational keynote speaker for more than 10 years. Stepping into the role of Producer on this film gave me even greater experience as a leader because it required me to be inspiring, effective, and persuasive. It was a tremendous project. I know that my experience as a producer has made me a more compelling and engaging speaker because I needed to motivate and inspire people to take action … bigger action than they ever thought possible. As a keynote speaker, I’m able to inspire teams to take this kind of life-changing action, empower them, and get them to believe in themselves that they can achieve unprecedented goals. After all, if I did THIS, I’ve proven that the sky is the limit for everyone else, as well. 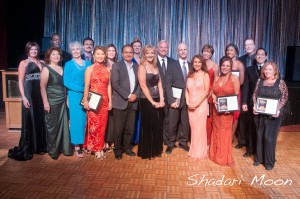 The Finish Line: Here I am flanked by the cast of experts & stars at the premiere of “The Keeper of the Keys”

The leadership, sales skills and strengths that I drew upon to accomplish making a film were mind-boggling. Here is a brief look at the steps I took to get my film produced … steps that I believe have helped to make me a more tremendous keynote speaker:

Having successfully written and produced a film has given me a greater degree of compassion. Sitting through screenings of my film and being able to see exactly which scenes resonate with the audience has heightened my awareness of what kinds of stories work and which don’t. Now, more than ever, I am able to deliver a high-impact, inspiring, and motivational program – one that compels people to take action, work together as a cohesive team, and achieve the goals that management has set forth. I have a lot to share and hope the coming year gives me every opportunity to inspire others to their greatest success.